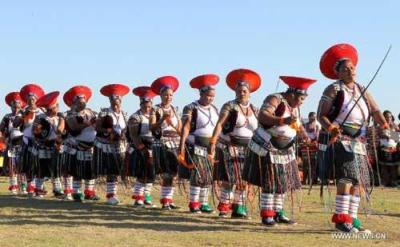 “At least he only has one wife. Can you imagine what would have happened to dear old Jacob? He would have danced all night just to get through the legal ones.” Kleinpiet points at the photo on the front page of The Upington Post. “And Obama actually praised his wife. That won’t work here.  I can just imagine…”

To you, my Number One wife, I pledge allegiance and respect. To have and to hold, to be faithful and kind. And you, Number Two, you are the most precious thing I’ve ever held in my arms. And, ah, Number Three – how shall I compare thee – you are unique and special. There’s nobody else I’d rather spend my nights with. Oh, Number Four, be not misled by silly numbers – they mean nothing. If anything, it says you are worth more than the rest. But wait, Number Five…when I’m exhausted, when I’ve finished working out the bond on Nkandla and how I’ll make others pay for it, it is you I long for. Now, there, there, Number Six, don’t get upset; you are the youngest …

“Can you imagine the size of the presidential stand they’ll have to build to accommodate him, the wives, and all the children so they can watch the parade go by? Then there are the in-laws, the extended families and the friends.  The best way would be to re-route the procession through one of those new stadiums the used for the World Cup.”  Kleinpiet’s smile disappears as he remembers something. “If Obama, who has one wife and two daughters, has to swear on two Bibles he’d be a good president; then we’d better start collecting Bibles, chaps. We’ll need a heap of them.”

“Well, I can tell you: if ever we have a parade like that, we’ll have better men to plan it.” Servaas folds the newspaper to put it firmly to one side. “We’ll make sure the air-conditioning works in the car. Then the president won’t have to get out every now and then for fresh air…”