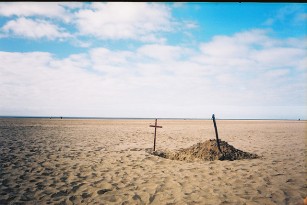 Oudoom sits in his study, staring at the blank page in front of him. Figuring out what to say as a eulogy at a funeral of a virtual stranger is not an easy thing to do. After all, how can he justify telling the congregation about somebody’s wonderful life; when his only involvement was with Kwaaikarel, the farmer whose nephew had the misfortune of underestimating the amount of cocaine in that last, final snort?

Kwaaikarel is an infrequent visitor to Rolbos. Living far out in the periphery of the district, he is a somewhat strange hermit who avoids human contact as much as possible. When Oudoom asked him about it once, Kwaaikarel simply said people have a way of disappointing him, and he prefers the company of his sheep. Look at the prophets, he said, they sought isolation when they needed to be near God. And that, in Kwaaikarel’s mind, was enough explanation – and he left it at that.

Now, after months of absence, he knocked on Oudoom’s door this afternoon; hat in hand and sorrow written over his face.

“I’m sorry. It’s my nephew. He died. We must bury him. Christianlike, you understand? It’s the least I can do. I have to.” Always stingy with words, Kwaaikarel obviously had great difficulty to string his request together. Long sentences, like people, seem to make him uncomfortable.

It took a good half-an-hour and three cups of coffee before Oudoom got the story. The nephew – one Gert Steyn – was his only relative. He died in Upington, where he worked as a clerk in the post office. A few years ago, Kwaaikarel went to unusual lengths to trace his nephew, because he felt the need to draw up a will.

“I never married, Dominee. My sister married this psychopath, and they had a kid. The man died in a crash. The police were chasing him. Then my sister got cancer. Gert was just out of school. Me and my sister, we didn’t get along. I had told her she married wrong, before the wedding. She told me what I could do with my opinion. Very angry. I didn’t go to the wedding. Or that crook’s funeral. I didn’t even hear about her cancer until months after her death.” Kwaaikarel needed another cup of coffee before he could continue.

“I’m not getting younger. The farm isn’t worth much. I don’t want the State to take my farm if I die. So I got a lawyer in Upington to draw up a will. He said maybe I should talk to Gert. I didn’t want to. But I went back to the farm and thought about it. So I went to see him.”

The meeting didn’t go well. The young man didn’t fit in with Kwaaikarel’s idea of what his nephew should be like.

“Long hair. Tattoos. Fancy clothes. Pointed boots. Big silver belt buckle. He had a motorbike and an attitude. Said I never cared for his mother. I didn’t get a chance to tell him why I was there. So I told him he looked like the devil and left.”

Somehow the morgue got hold of Kwaaikarel’s address (there are no phones in that stretch of the Kalahari) and they sent a man all the way out there to inform him of his nephew’s death.

“I didn’t like Gert. He was arrogant. Used drugs. All those devils tattooed all over. And he was right. I should have cared for my sister. Shouldn’t have stayed away after her husbands funeral. Shouldn’t have felt I told her so. Shouldn’t have been angry at her.” The deeply tanned hand wiped away a troublesome tear. “Now he’s dead. You must bury him. You and me, we’ll do it. The body will be here tomorrow.”

Kwaaikarel apparently settled the bill with the funeral parlour, arranged for the body to be transported to his farm, and had dug the grave himself. Once the coffin was delivered, he planned to ask the driver and his labourer to help him get the coffin in the grave.

“Then you can say a few words. Maybe we can sing a hymn. At least it’ll be Christianlike.”

Oudoom couldn’t refuse. Here was a man, already living at the outer edges of society, asking a favour. If he refused, it’ll just ostracise the hermit to an even greater degree. Yes, he said, he’d do it. He’ll be there around lunch time the next day.  Oudoom offered to do a prayer with Kwaaikarel, but he refused, saying thank you and Mevrou makes good coffee.

Now, the only thoughts in Oudoom’s mind are those concerned with grief. Grief and sorrow about wasted opportunities. Chances to fix things that were never taken. Soft words that could have avoided so many year’s worth of bitterness.  Simple little kind gestures that could have prevented the rift in this broken family from becoming an abyss of hate and misunderstanding.  And now he has to go and say nice things to make Kwaaikarel feel better about his past…

The sun beats down mercilessly as Oudoom negotiates  the rutted track to Kwaaikarel’s  mud-and-brick homestead next to the creaking wind pump. A surprisingly thin goat (most probably the milk supply of the farm) pokes at a shrub with a dusty foot as if admonishing it for its lack of foliage.  The disinterested grrr-arf! tells Oudoom where the grey old dog is sleeping on the porch. The place has the run-down look of a slowly dying animal.

The grave is just beyond the house, dug into the soft sand of a slow rise in the ground. Kwaaikarel has dragged out a chair and is sitting there, hat in hand, staring at the coffin in the hole. He doesn’t look up as Oudoom’s shoes crunch their way across the gravel.

“I tried to think of something nice to say…” His eyes rest on the coffin, varnished and shining in the grave. “But that would be stupid. Things happened. Life went on. Choices were made. Nothing I can say now, will change it.” Oudoom looks down at the tears on Kwaaikarel’s cheeks, wishing it was easier to lie. Eu-logy … Good Words. What good are words, afterwards? “We have to live with our pasts, Karel. We can’t change that. But we can learn from it…”

The drone of an approaching vehicle makes him hesitate. Both men turn to see the streak of dust on the track leading to the house. Kwaaikarel opens his mouth to protest, thinks about it, and clams up. No need to start a fight next to a grave. He glances up to Oudoom, and is surprised to see the pastor smiling.

The old Land Rover strains to a stop next to the house. They’re all there: Vetfaan, Kleinpiet, Gertruida, Boggel, Precilla – dressed in their Sunday best. Without a word, they take up position next to the grave.

“And today, we want to be good words for you. All of us. If you allow us, we’ll be here to help.”

He pauses a moment in thought, decides he’s said enough, and says: “Amen.”

Gertruida says it shows you: nothing in life is permanent. Kwaaikarel is an excellent example, she says; look at the way he’s changed. Despite his name and his past, it took a funeral to make him visit Boggel’s Place every two weeks or so. She says they will see: one of these days he’ll attend one of Oudoom’s services again. Not for good words, but for The Word. An eulogy, according to Gertruida, should tell us where to go and not where we’ve been…