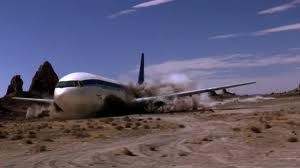 Captain Mokoena sees the ground rushing up to meet the aircraft. Although he has bled off all speed he could without forcing the plane to stall and literally fall out of the sky, his instinct is that they’re still travelling way to fast. He still fights the controls, but there’s no sense in it now; barely feet above the ground, nothing he does now will have any effect.

When the belly of the plane crashes into the ground, the grinding and tearing at the fuselage is deafening. Mokoena had almost landed the plane on the road he had spotted.

The plane skids along on the uneven surface next to the track, leaving a trail of destruction and scattering the broken bushes, pieces of iron and aluminium and the contents of the baggage compartment over the veld. A huge cloud of dust follows the speeding craft across the surface of the Kalahari like a frantic angry dog, while the tearing and screeching of the destruction seems to pitch higher and higher with every passing second. 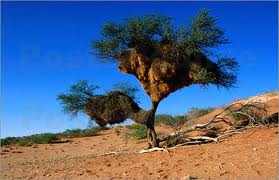 Mokoena can see the tree coming. It’s the only tree next to the road between Grootdrink and Rolbos, a large thorn tree which serves as home for several families of communal weavers. The aircraft seems to be drawn to it as if by some giant magical force, and there’s nothing he can do to avoid smashing into that as well. As the tree looms larger and larger in the windscreen, he starts praying softly.

Gertruida, in the meantime, has been driving like a woman possessed, and maybe she is. When she reaches the turn-off towards Rolbos, she has to slow down on the gravel road; but even so her skill behind the wheel would have impressed Alonso. Even Hamilton, maybe. And, while fighting the wheel, she has managed to phone Boggel with the news. I think an aircraft is going to crash near Rolbos, Boggel. Please get the people to be on the lookout, will you?

Now Boggel isn’t your every-day barman. He knows his customers too well. When Gertruida has that tone of voice (almost verging on hysteria) you don’t ask questions. Rushing out, he gets the whole town to scan the sky for anything that looks like an aeroplane in trouble. They all gather in Voortrekker Weg, where Vetfaan divides the sky into sections to watch.

“What’s this all about, Boggel?” Precilla watches an eagle soaring high in the sky, her hand held above her eyes to shield the sun.

“She didn’t elaborate. Sounded extremely stressed, if you ask me. Look, we know she went to Upington to fetch Doc Woodcock. By the tone of her voice – and the fact that she’s on her way here – I’d guess it’s Doc’s plane we’re looking for. Other than that, your guess is as good as mine.”

Vetfaan has his powerful binoculars aimed towards the South, more-or-less in the direction of Grootdrink, and tells everybody this is a senseless waste of valuable drinking time. “What are the chances of us spotting an aeroplane here? We’re not on any flight path at all.”

“That’s the point, Vetfaan. If that plane is in trouble, it means something is wrong. And wrong planes may stray far from the right path.” Servaas never lets an opportunity pass. “Like us, they tend to crash because of that.”

“Oh, put a sock in it, will you?” Kleinpiet isn’t in a mood for a sermon. “Rather watch your bit of sky and shout if you see anything.”

For the next thirty minutes or so, the townsfolk argue, banter and grumble while they spot eagles, hawks, several crows and a solitary heron (where did it come from?). Then Vetfaan lets out a shout.

Mokoena instinctively leans over to his right, as if willing the stricken craft to veer off it’s crash course with the tree. It doesn’t help, of course. The almighty bang as the plane hits the old tree is louder than the screeching and grinding of the fuselage over the rocks that is tearing belly of the plane apart. The windscreen shatters as a branch snaps off the trunk. The obstacle  causes the nose to slow down, slewing the tail of the craft in a wide arc across the veld, flattening several giant ant heaps. Somewhere in the middle of the plane, the structure starts folding, bending, as the plane threatens to snap in two.

It is as if nature honours the brave Captain Mokoena with a moment of complete quiet, ashamed that such a beautiful craft had to be twisted and broken in such a vicious way.

The first one to react, is the woman sitting next to Doc Woodcock.

“I didn’t die! I didn’t die!” With blood streaming from a cut in her forehead, she manages to unclasp her safety belt to stand on trembling legs. Slowly, others follow her example – the clicking of the safety belt buckles unnaturally loud in the eerie stillness. Ons stewardess lies slumped in her seat, still help upright by her harness, but apparently lifeless. The other one gets up, walks in a daze to the emergency door and struggles with the mechanism. A burly man joins her and they force the door open.

The bottom of the plane is almost gone, leaving the red Kalahari sand only a foot or two away from the exit. Like sheep on their way to a dip, the passengers queue up to take that small step to freedom. It is not neccessary to hurry them up – they know they have to get out as soon as possible. Men and women, some of them bleeding and limping, help the fellow travellers who are too dazed or shocked to get off the plane on their own accord.

Kallie Franz is last of the able-bodied passengers to leave. The stewardess asks him to take the group as far away from the wreck as possible and to keep them together. She says she’s going too check whether anybody is left behind, and if the pilot is okay.

And then they hear the roar of approaching vehicles. The dust on the road from Grootdrink – as well as from Rolbos – seems to indicate that help is on its way.

In seat 26 E Doc Woodcock refuses to get up. He’s hugging himself while reciting Baa-baa black sheep in a small-boy voice; his brilliant mind regressing to a time when the world was a happy place and love wasn’t just another four-letter word…