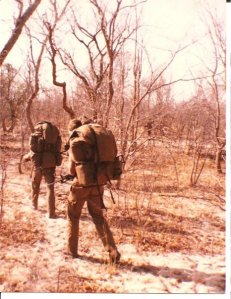 With the sun slowly dipping towards the distant horizon, the brigadier finally relents and accepts the dinner Gertruida insists he should have.

“You’ve been talking all afternoon, Brigadier, and your story has a long way to go, still. Go on, have a bite to eat. We’re not going anywhere.”

That, of course, is true. The other patrons in the bar won’t budge until they haven’t heard the last word in this tale. The brigadier has been the subject of many conversations since he arrived in the district so many years ago. Known as The Brigadier – or simply That Strange Man on the Grove Farm – he rarely ventured from the farm. Once, he drove through town to visit a doctor in Upington; and on another occasion he bought a fan belt from Sammie (for a generator? a water pump?). Other than that, he kept to himself on the disused farm where the huge padlock on the gate told the neighbours to stay away.

And now, today, he is here telling them why.  There is no way they’re going to miss the rest…

Kasper van Graan mops up the last bit of the gravy with the last crust of bread, sits back, and belches politely. Boggel – who saw the alcohol was slurring the man’s speech – now pushes a mug of steaming coffee over the counter.

“Thank you.” He meets Boggel’s gaze and nods grimly. “You’re all so kind.”

The village was nestled between some high trees and consisted of a few houses, a dusty road, and a small church. It looked exactly like the photographs they had studied. A disinterested dog sauntered down the street, ignoring the few chickens scratching hopefully in the dirt. The slight breeze carried the smell of wood smoke and burnt pap.(porridge).

The three men decided to stick to the plan. They’ll rest until the last villagers have gone to sleep, before setting the charges, The church, they knew, held the arsenal of weapons. Aerial photographs taken a week earlier, showed the line of trucks and the cases of ammunition. Now, looking down at the town from a nearby hill, it was obvious: there was no other place the villagers could have stored the explosives, anyway.

If they detonated the Semtex correctly, the town would cease to exist.

They watched as the villagers had a meeting – or a party – in the street, feeling no remorse for the lives that were going to get lost later.

Adrenalin…lots of it. Speeding up heart rates, dampening hand palms, causing the slightest of tremors. Every sound amplified. Pupils dilated to peer into the darkness. Seconds dragging by on leaden feet…

When at last the village grew quiet, they waited another hour before daring to make their approach. Just outside the collection of huts and buildings, they huddled down to insert the detonators and timers into the plastic explosives. With that done, they observed a minute of silence before heading for the church.

It was the dog that gave them away. At first it snarled, as if it knew the three men were planning to kill it, too. Then it started barking furiously..

“We were caught in the open. Lights came on. And then the shooting started.” By this time, the coffee is finished and the brigadier signals for something stronger. “You chaps,” he stares pointedly at Vetfaan and Kleinpiet, “who’ve been shot at, will understand. That sound a bullet makes when it whips past your head, is almost the scariest thing you’ll ever experience. But even worse, so very much worse, is the whump! of that bullet when it strikes flesh. Whip! is bad. Whip-whump! is the worst. Funny, that: you don’t hear the crash of the gun: you hear the bullet..

“And within a single second, I heard it happen twice. And then I realised my pants was wet. At…at first I thought I had wet myself, but it felt too sticky. It was blood. I never even realised I had been hit…”

“The two other guys simply fell down. I stood there, in the middle of that dusty street: a fool in uniform while every light in that damned town was trained on me. I think I stopped thinking for a while.”

“What happened to the two other guys, Kasper? Who were they?” Gertruida’s curiosity gets the the better of her when the brigadier falls silent for a while.

“I erased them from my mind.” He sets his jaw firmly as his face goes blank. “I refuse to remember.”

And it’s true. The three of them had survived for so long, despite the odds stacked against them. They were much more than comrades-in-arms: the bond between them was forged in the over-heated furnace of loyalty, respect, unconditional sacrifice. The brigadier will never admit it, but his feelings towards his two comrades represented the ultimate form of love he’d ever know. They’d die for each other.

And two of them did, in the split-second when the whip-whump! thudded twice.

Ignoring the interruption, the brigadier continues. “They were dead. Both of them. Dead. Gone. The bodies weren’t my friends any more – they were pools of blood beneath lifeless bodies in the sand. I looked down only once. Since then I worked hard to forget them. For more than twenty years, I tried to forget them. Now…don’t you dare remind me!” His eyes ablaze with indignation, he snarls the last bit. “I don’t need that.” He pauses again. “Correction: I can’t face that.” He seems oblivious of the angry tear on his cheek.

” I lost hope.” He tries to make it sound casual, almost as if it were a joke, but the acknowledgement causes a most unsoldier-like creasing of the skin on his chin as his face twists into the picture of grief. “I-l looked down and saw how stupid it all was. The killing. The subterfuge. The blood. My comrades were dead and I was wounded. South Africa – like me –  lost her innocence –  raped by politics and greed.

“What the hell was I doing there, anyway? If the village got blown up, the next village will take over. Fighting causes more fighting. Hate spawns more hate. Injustice breeds more of its own. It was so senseless…”

He sighs, downs his drink.

“So I lay down my rifle. I couldn’t stand any more, anyway. So I went down on my knees and surrendered. The ultimate shame. The act of a coward.”

You can hear a pin drop in Boggel’s Place. Vetfaan and Kleinpiet, both with painful memories of those days, exchange guilty glances. Boggel shakes his head, as if he wants to clear away the thoughts now surfacing in his mind. Even Servaas doesn’t want to remember.

Gertruida gets up to put an arm around the old man’s shoulders. “You were isolated, wounded, alone. What would it have helped to try shooting your way out of that village? Wasted one more life – or more – and many more bullets? You did the only sensible thing under the circumstances. Go on, finish it. Get it out…” Her voice is gentle, kind, but still retains the tone of authority. Now he’s come this far, he cannot, may not back out.

“I-I suppose I passed out. I felt dizzy and nauseous, confused. And when I woke up, I was in a bed, That’s when I met Alycia.”

One day, some clever nerd with bottle-bottom glasses and a weird hairstyle will come up with the answer to the biggest problem on earth: why do we need conflict and love in (almost) equal doses? And why does the one (almost) inevitably lead to the other? And why do we get so confused between these two that we (almost) always insist it’s the same thing?

The brigadier’s love for his country led him to conflict. And the conflict made him realise how stupid it is not to love.

So, as the patrons in the bar ready themselves for the next chapter in the brigadier’s life, the memories of the past and the hopes for the future mingle into each other. Like a drop of ink in a glass of water, it becomes impossible to define the border between yesterday and tomorrow – for, are we not bound to the inseparable Siamese twins of forgetting and remembering? The one can simply not exist without the other.

“Tell us about Alycia, Brigadier?” It’s Gertruida, of course, who realises that the most important part  – the most painful part – of the story still needs telling.