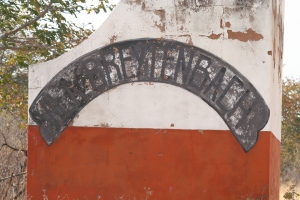 “I told Alycia I’d be back, knowing neither of us believed that. She belonged with her people and her country, I belonged to a different world. I tried to thank the villagers. And then she came up to me, stood on tip-toe, and kissed me goodbye.”

The brigadier accepts a handkerchief from Vetfaan, smiles apologetically, and blows his nose with gusto.

“So I walked out of there, wearing peasant clothes and a floppy hat. The villagers had returned a few of my possessions: a knife, a lighter, a compass. With that, and the few Kwanza notes they gave me, I was on my way back to the Republic. I knew I only had to head South. Somewhere along the line, I’d reach the Kunene and once across it, I’d be in Namibia.” He spreads his hands wide, “But I had no idea how far into Angola I was. Of course, I knew the position of the original village we targeted, but the villagers had moved farther into Angola; and they couldn’t really tell me where – exactly – on the map they were. And…they didn’t have a map, either.

Survival in the bush depended on many factors. Water, food, shelter and avoiding enemy forces were but a few of these. The water was easy: it was the rainy season…

And it struck him then – this was the second rainy season he spent in the bush – the first one was after he had started recovering from his wounds. That meant he had spent two years with the villagers? Two years? He stopped in mid-stride.

Yes, he remembered the days and nights – even the seasons – but time simply didn’t matter while he was with the villagers…and Alycia. They had no watches, no calenders. Even the days were all the same: no Sunday or weekend-tags. The concept of Time was simply governed by the fact whether it was day or night. Other than that, it had no significance.

But,,,two years have passed. And back in South Africa, the clocks have been ticking along madly. What had happened in the meantime? Was the war over? Who won? Who was governing who? It struck him the he had seen or heard no fighter planes for…ages?

And what about Hester? Was he given up as Missing in Action? Killed in Action? Their raid on the village had been cloaked in secrecy. There was no backup plan. The logical thing for the general to have done, was to assume the unit had been wiped out. He would have seen the follow-up aerial photos, the church still standing, the village unharmed.  Then…what? A letter to the grieving widow? A memorial service?

He plodded on, a dead man walking back to his country, uncertain of the future. 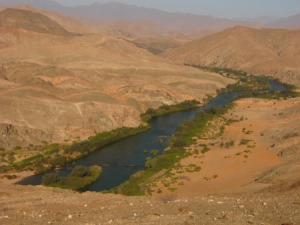 “I kept track of the days, all forty-five of them, before I reached what I thought was the Kunene. The rainy season sorted out my water problems, and I knew enough veld-craft to know which plants to eat and where to find roots and tubers. Along the way, I supplemented my diet with insects, a snake, a couple of rabbits and the eggs I found in bird’s nests. Of course, I skirted around every village and avoided contact with anybody. I was the invisible man. The rabbit skins became my new shoes…” 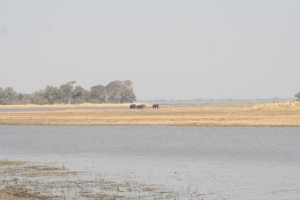 “But something was wrong. This river flowed southward, not westward like the Kunene should do.And then it struck me: I was on the eastern bank of the Okavango, the great river feeding the Okavango Delta. And that implied that if I kept on following the river, I’d reach the base of 32 Battalion, the Recces, next to the village Colonel Breytenbach established there. I was on my way home…”

For days he anticipated the luxury of a hot shower, soap, a meal (anything!) and a cold beer. This kept him trudging along, walking from first light until dusk, gathering whatever there was to eat along the way. On the last night before he reached Villa Breytenbach, he heard the sound of a lorry, It was his first contact with the life he left behind two years previously. Tomorrow…tomorrow his ordeal would be over.

But it wasn’t. When he reached the camp, it was deserted. An old man was sitting at the gate to Villa Breytenbach, and upon questioning, he informed the brigadier the war was over.

“The soldiers left, Boss, a long time ago. They left when the war ended. I’m the only one here.”

“Eish. I don’t know. Everybody left.”

The brigadier sat down in the dust and started crying.

“I didn’t know what to do. My plan had been to get back to the army, and then sort everything out from there. I don’t know how long I sat there. The old man gave me some bread. He said there was a road nearby and that I could maybe get a lift from there…to wherever. That’s exactly what I did.”

He knew he had no papers, so getting to South Africa through Botswana would be almost impossible, 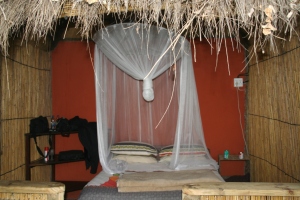 A room at Ngepi Camp today

“But for once, my luck was in. The first lorry to pass, stopped to pick me up. The driver was on his way to Ngepi, a new camp that was being built on the Okavango River. We reached the camp at sunset. And here, at last, I found out what had happened in the meantime.” He pauses for a dramatic moment. “The war was over. I was dead. And Hester married an accountant. My world, as I knew it, no longer existed…”

The sadness has left the brigadier’s voice at this point, replaced by an unmistakable note of bitter anger.

“I lost everything. Everything! And for what?” His gaze travels over his audience, his desperate loneliness searching for relief.

This time, not even Gertruida dares to answer him. Clever arguments won’t fix this. More, much more, is needed.