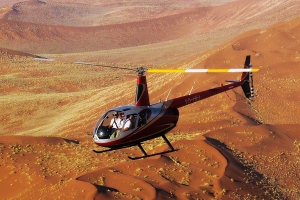 “This is a hare-brained scheme,” Gertruida whispers while they’re waiting for the helicopter. “Matotsi thinks we’ll be able to spot the wreck from the helicopter! Imagine that! And he insisted we come along, so he can be assured of our silence. What’s he going to do – even if he spots the wreck?” The worried frown cuts deep into her brow. “This is just too easy – I’m sure he’s up to something…”

“He told me that here’s been no aerial searches of the off-shore area for ages. None that he can trace, anyway.” Servaas hitches his small bag to hang more comfortably from his shoulder. “Anyway, we’re getting a free trip – and that counts for something.”

“I don’t know… I simply don’t trust the man. Look at the way his goons treated me? No, I say we must watch him very carefully.” Elsie looks up as she sees the little general approaching. “Shhh, you guys, here he comes.” She moves a little closer to Servaas, her hand searching for his.

“The helicopter will be here soon,” Matotsi smiles confidently. “Then we’re off…”

//Xuiram floats – flies – in the Land of Dreams. His mother and father smile at him: they want him to join them in the Land of Plenty. Come, son, we’ve built a special hut for you. You must prepare,  it is almost time…

How many times has he dreamt of this Land? A long time ago, when the family was larger and the elders still held the yearly meetings in the desert, they talked about the Land. There were, they told little //Xuiram, green valleys, fat Eland, easy hunting. Lots of water. In fact, once you reach this Land, you have need for nothing more. The most remarkable thing he remembers from those tales, is that all people – even The Others – live in harmony with each other there.

And now it is almost time for him to journey to that land. A happy smile creeps into the wrinkles of his face.

The box, //Xuiram…first find the box…

It takes a while to leave the dream-world. Then, getting up slowly, he approaches the back wall of the cave.

The helicopter banks sharply as they fly over Pomona, the deserted mining town in the middle of the barren wastes of the Sperrgebiet. Heading west, the aircraft lifts its tail as it speeds up.

“This is one of the most inhospitable wastelands on the African continent.” The pilot’s voice in their earphones confirm what they’re looking at. “You get lost here, and you die. Short and sweet. Survival here is out of the question.” 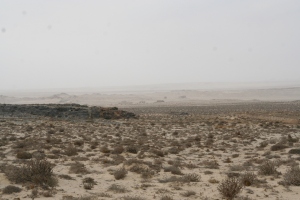 Underneath them, the desert is almost featureless. Stunted little bushes survive by absorbing the cold morning mist that rolls in from the cold Atlantic. Other than that, there is no sign of life at all.

“I have a bad feeling about this,” Gertruida says, not quite realising her helmet microphone communicates with everybody on board.

Matotsi glances over at her. What is it in his eyes? Gertruida feels a shiver running down her spine.

“You can be glad you’re flying. The old track running to the Bogenfels has not been maintained for many years. It is almost impossible to get there, except through the air.

“Oh, and there you are!” The pilot points. “Bogenfels…”

//Xuiram finds the rock at the exact point he saw it in his dream. Straining and sweating, he shoves it to one side.

The elements have done their work. The box is rusted and the once-shining surface is now dull and covered with flaking bits of metal. When //Xuiram lifts the lock to inspect it, the clasp crumbles in his hand.

Inside, he finds two slabs of shining metal, the likes of which he’s never seen. There is also a piece of yellowed paper, parched and fragile with age, on which somebody drew some lines. In the middle of the page, the black X draws his attention.

The pilot puts down the helicopter within sight of the Bogenfels.

“This is as far as you go,.” Matotsi’s voice is harsh, commanding. “Come on, get out.” The snub-nosed pistol in his hand leaves no doubt about his intentions. “Out. Out!!”

“What are you doing, General? Why…” For once, Gertruida has no answers.

Servaas, Kleinpiet, Vetfaan, Gertruida and Elsie do as they’re told. Boggel is the last to alight, struggling to get his short legs from the hull to the landing gear.

“It’s easy. You lot,” the general waves the pistol towards the bedraggled group, He has to shout to be heard above the slow whunp-whump of the still-revolving rotors, “know too much. Now you’re simply an irresponsible group of tourists who wandered off into the desert. When they find you in a few months time – or a few year’s time – nobody will connect you to DEAD. A nice, clean way to get rid of civilians who snooped where they shouldn’t have. I’ll file a report stating that you said last night you wanted to explore the desert towards the north of Luderitz – and that you left early on foot. Me and the pilot here, we’ve spent the whole day looking for you. They’ll send out search parties, of course, but unfortunately they’ll be looking for you in the wrong area.”

The pitch of the engine increases suddenly and – as if plucked upwards by a huge invisible hand – the helicopter lifts and speeds away.

The small Bushman family hears the helicopter and now //Xuiram’s oldest son breaks tradition by shouting for them to get cover. “Hide, hide my family! I know that sound, It means trouble. We may not be seen. Run…run!”

//Xuiram, too, heard the sound.

Men will come here, //Xuiram, and they’ll die. The words of his ancestor seems to emphasise the noise the helicopter makes, Closing the box carefully, he drags it over to the smouldering ashes of his holy fire. He’ll ask the spirit-world. They’ll know what to do…

Vetfaan surprises everybody with the range of expletives they never use in Boggel’s Place.

“The bastard. The absolute bastard…”

“I thought…,” Gertruida begins, but Servaas stops her.

“Ja Gertruida, you thought. That doesn’t help us now. Not one bit. How we got here is not important. How we get back to Luderitz, is.”

“That arched rock isn’t that far away, guys.” Boggel tries to sound confident. “Let’s go there and look for shelter. And then let’s sit down and talk. Maybe…”

“Let’s go.” Vetfaan strides on ahead.

“People, my father. There are people coming.”

//Xuiram puts his hand over his mouth to remind his son they’re not supposed to talk. Then he nods. Yes, he saw them. Two women, four men. White people. They’re scared.

And then, suddenly, he knows why his family had to make this last pilgrimage…