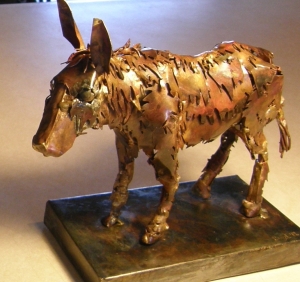 “Is it the same bloke?” Kleinpiet spreads the magazine on the bar’s counter, pointing at the smiling man in front of the huge house. “If that isn’t old Coppertone, I’m not me. It says here he’s one of he wealthiest men in Wellington. He’s still making those silly copper donkeys, apparently. Some guy from China buys all his stuff – not a single one gets sold locally. It seems this Chinese gentleman fell in love with old Coppertone’s art and has bought the rights to distribute it in China.”

“Imagine that happening to old Coppertone!” Boggel eyes the dull handles on the door as he pushes over a fresh beer to Vetfaan. “Man, that man could put a shine to everything. Remember how he cleaned up the church’s bell? And we all used his services for such a long time.”

“Ja, I remember. Once a month or so, he’d come to town with his donkey cart and his rags and the Brasso. Everybody brought their pots and pans and ornaments, and he’d sit there under the tree in front of the church, humming to himself while he polished things up. He just loved copper and brass. Said it was the shine that made him happy.”

“It was in his genes, guys. His great-great-greatgrandfather – or whatever you call him so many generations ago – was one of the guides when Simon van der Stel explored Namaqualand in 1685. They found copper  there, and a bit of silver. That’s when it started – this love affair with copper and brass.” Gertruida, who knows everything, proceeds to lecture them on that historic trip.

“Well, he sure was good in getting our old ornaments looking like new again, that’s for sure. But as a copper smith, he was rather useless. I remember those copper donkeys. All skew and silly. You could recognise the four legs on most of them, but the bodies and the heads were never quite right. And he wanted a fortune for them, because he said they were hand-made. Shame, nobody ever bought those donkeys.” Kleinpiet draws a donkey with four short legs on the counter with the froth on his beer, smiles at the picture and wipes it out with a cloth. “Anyway, who wants a crooked donkey on the mantlepiece next to the picture of the Voortrekker Monument? It just won’t do.”

“Didn’t he go to Cape Town in the end?” Concentrating hard, Vetfaan remembers something  the old man said long ago. “He wanted to become a sailor or something. Said there was more brass on boats than in towns.”

“You’re right! He saw a photograph of an old ship in Die Huisgenoot, and was fascinated by the portholes and fixtures on ships. He said he’d never have a dull moment if he worked in a harbour. So he packed up his donkeys and rags and left.”

“And now he lives in a mansion!”  Pointing at the picture of the smiling old man in front of the huge house, Kleinpiet shakes his head. Life s so unfair! Here he is, working so hard on his farm, and he’d never own a property like that.

“There was a story,” Gertruida says, “that he dug out his own copper ore to make those donkeys. Somewhere near Springbok. He really produces those donkeys from scratch. Melts the ore, hammers it into shape after making moulds with clay he found in a riverbed. He never disclosed the site, though. Only said it’s in the Richtersveld, but that was all. Said it was a family secret.” She scans the article and sighs. “See, here they say the same. He still goes there to get his material.”

“Well, good luck to him. If those Chinese think his work is good enough for them, it just shows how stupid they are. No self-respecting farmer – who knows what a donkey should look like – will buy one of those donkeys. What will other people think of him? Or, for that matter, how will his own, real donkeys feel like if they saw these little statues? The district will be filled by donkeys trying to look like that.” Vetfaan closes his eyes to see scores of donkeys hobbling around on uneven legs. No! That won’t do…

Kleinpiet turns the page to show them the photo of Nkandla. Yes, they all agree, life is sometmes completely without any form of logic or justice. 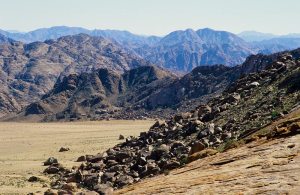 They don’t know about the little mine in the remote Richtersveld, where the man they know as Coppertone has discovered a strange line in the rocks. It doesn’t look like much, one must admit. Just a vein in the rock formation, shining dully if the sun catches it at the right angle. It is here, in this remote outcrop, that Coppertone gets the metal he melts to purify before creating his donkeys.

However, the donkeys aren’t completely finished when they are exported. When the little statues reach the rich man in Beijing,  the statuettes get the final touch.  It is only here the man takes out the punch to carefully stamp 24 Ct on each of them.

5 thoughts on “Coppertone and the Donkeys”