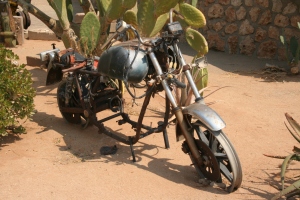 Perhaps the townsfolk would have taken longer to notice the change, if old Servaas didn’t cut the tail off the Kudu skin that serves as a carpet in the vestry. That skin has been there for ages, ever since Ben Bitterbrak donated it in lieu of his yearly tithe. He said – at the time – that Oudoom should consider the drought and the rising cost of living, and that the skin was the best he could do. As for the rest of the Kudu…well, he would have donated that as well, only he couldn’t. The biltong was just too tasty, and the donkey pulling the cart was too slow…

When Oudoom noticed the absent tail, he naturally thought some mice must have taken a liking to the skin. Still, he mentioned it in Boggel’s Place the next Saturday, when the conversation dried up and the creaking of the corrugated iron roof became too much to bear.

“But didn’t I see old Servaas walking down Voortrekker Weg with a funny thing in his hand? I thought it was a fly whisk, like Kenyatta used to have. That whisk was a gift from Haile Selassie and Kenyatta used it as a symbol of wisdom.” Gertruida frowned. “I wonder what Servaas is brewing up? Must be something extraordinary. Maybe he wants to give it to Zuma?”

“Nah.” Vetfaan shook his head. “But he has been acting strangely for a while now. Every time I ask him what he’s doing in his garage, he says the same thing. ‘Cleaning up my Enfield.’.” He immitated the old man’s raspy voice, much to the amusement of the group at the bar. “Now, how long can a man fiddle around with an old gun? Clean the barrel, oil the stock, check the trigger. Shouldn’t take more than an hour or so, even if you’re slow. But it’s been weeks – months – now, and he says he’s still busy.”

“Enfield?” Gertruida got that look again. “You don’t mean… Oh, my gosh, Noooo…!”

It used to be Vetfaan’s uncle’s bike. During the sixties everybody got onto the bike-wagon. Well, almost everybody. If you had a pair of jeans, John Lennon shades and a bike, you were automatically called a rebel – which was the object of it all. The church frowned on you, your parents tried to ignore your ponytail and the girls – they were called sheilas or – in colloquel Afrikaans – ‘n stuk or ‘n sleep. (a piece or a drag….) (not that type of drag, the nice type)  – well, the girls trooped along behind you. A rebel, in real James Dean style, made the young ladies draw in a breath, pull back the shoulders and smile innocently while they hitched up the mini a fraction. At least, that was what the ‘rebels’ thought. Like so many other urban legends, that one didn’t quite work out that way for Uncle Frankie.

To cut a long story short: Frankie fell in love with Sissie Mostert, a rather rotund young lady with mousey hair, a small moustache and a bumper crop of pimples. Sissie was the product of a finishing school in Paarl – her parents knew she needed every bit of help to catch a man, any man. Her subjects included Housekeeping, Cooking, Sewing and Music.

Legend has it that the Lennon-bespectacled Frankie went through a guitar-phase in the hope of eclipsing the Beatles. For this, he needed a band. Now, you go hunting for real musicians in the Kalahari and you’ve got about the same chance for success as looking for biltong on Vrede’s cushion. Some things simply are impossible.

But Sissie? She could read notes and bang pots and pans around like nobody else. When she and Frankie teamed up to create the Keimoes Kamerorkes, her parents took a dim view of the band. As fate would have it, they received a call from the headmistress of the finishing school a week later, politely informing them that Sissie cannot return for the next term. She was a nice girl, but…with little or no talent (for anything).

Whatever one can say about Sissie, she wasn’t stupid. One evening she banged more than the makeshift drum set in Frankie’s garage…and the rest is history. Once she got her man, she slowly asserted her position by taking care of Frankie’s house, his bike and his life. Oh, they were happy enough – the six children stand as evidence of that – but Sissie had this burning desire to be a somebody in society. After a lifetime of rejection, Frankie was her ticket to becoming a socialite.

And she did. Frankie joined the railways as a stoker, became a deacon in the church and a member of the Rapportryers. His prized Lennon glasses fetched a few Rands at the next church bazaar and his ponytail was sacrificed in the name of love. (Which goes to show that one shouldn’t be too hasty to judge a less-than-pretty girl on her looks alone. Drumming apparently has its advantages. You know, with the banging and all that.)

Frankie’s bike had to go, as well, of course. It ended up in Vetfaan’s father’s garage, where it gathered dust until the old man’s death. Vetfaan inherited the rusty old motorbike, stored in on his farm…and was completely flummoxed when Servaas offered to buy it.

Gertruida was right, of course. The Enfield that occupied Sevaas’ mind lately, is a Royal Enfield Bullet, a collector’s dream if ever there was one. And when Servaas stops the thundering machine outside Boggel’s Place, the patrons at the bar can’t believe their eyes. The bike surely looks like it’s just come from the dealer’s showroom!

“What on earth…” Kleinpiet walks around the bike, admiring the chrome and the engine. “Servaas? I never knew…”

“Ta-daa!” Servaas prances around the renovated bike with obvious pride. He’s dressed in his old khaki pants (short), a floral shirt (really old) and a hat with leopard skin trim.

“What on earth has happened to you? Where’s the black suit?” Gertruida gapes at the sight of Oudoom’s head elder, dressed as a Kalahari-hippie.

“Late-life crisis, Gertruida. Boys go through puberty, then everybody tells themselves it’s only a phase. Then men go through midlife crises, and people say that’s normal. Well, me? I’ve got a late-life crisis, old girl.” For once, Servaas’ smile is genuine. “Why must I spend my last days as a morose old man? Black suits and depression? No thanks. Not for me. Me and my bike…we’re going to hit the back roads and explore the world beyond Upington and Springbok. Last time I ventured beyond the known universe, was when I was in the army. Now it’s time to broaden my horizons…”

“Did you bump your head? Forgot to take your pills? Ate some mushrooms?”

“Not at all, my girl. Not at all. No, I’ve been thinking. Siena has been dead for a long time now. I did my bit for Oudoom and the church. And I thought to myself: what’s left? A funeral?  No…there must be more. So here I am, ready to embrace my crisis and live a little.”

Servaas walks up to each member of the group, shaking hands solemnly.

“When you see me again, I’ll be a new man. Take care of yourselves, will you? And tell Oudoom the communion wine is almost fiunished – he must order some before the next one. So…wish me luck as you wave me goodbye…”

He manages to get onto the bike with his third attempt (arthritic hips) and pushes the hat down firmly before he kicks the engine to life. He leaves the flabbergasted group standing in Voortrekker Weg as he putt-putts demurely down the street towards Grootdrink.

“My word,” Kleinpiet doesn’t know what to say.

“My gosh,” Gertruida, too, is speechless.

“My Kudu tail,” Oudoom has joined them, staring at the makeshift ponytail bobbing about under the hat.

And that’s where I’ll leave you for now. The story of Servaas, The Biker, will continue after I’m back from a trip to Botswana and the Caprivi, where I hope to chase a tiger fish and maybe a few stories. So, spend some time with the older stories on the blog, buy one of the books in the side panel, or wait for the two Rolbos books about to be published.

Or simply sit down in Boggel’s Place and have a cold one. There’s always something to talk about in the bar – especially now that Servaas surprised them like this.

(Thanks Michelle, for the link to Zambezi)

11 thoughts on “Servaas, the Kalahari Biker”