“I remember,” Vetfaan said as he nursed his beer, “how we struggled in Angola. We had to use a map and a compass – and had to trust both completely. No GPS in those day, none at all. You sat down with your little sliding rule, looked at where the river – or mountain – was, and plotted your course.”

“I remember that,” Kleinpiet smiled. “Got lost a few times, too. And at night it was even worse: you couldn’t use a torch to study the map. The stars helped, though.”

“There was one incident…”

Nighttime in Africa represents a fascinating interplay of uncertainty and adventure. This is true for the modern-day camper; but it’s even worse during times of war and conflict. Today one may sit comfortably next to the fire, clinking a few ice cubes in the scotch in the glass, while listening to a hyena calling a few hundred yards away. That’s the romantic picture, the allure of the bush, the reason why so many tourists flock to this beautiful country.

But when the smell of cordite stings the nose and the thud-thud-thud of a hovering gunship helicopter seems  to be the only sound in the gloom…well. then even the bravest of soldiers finds it hard to control body and spirit. When rifle inspection is done the next day, it isn’t unusual to find so many soldiers with full clips of ammunition – they simply crept to the nearest rock to spend the night in prayer.

It was during the build-up to Cuito Cuanavale that Vetfaan lived and prayed through just such a night. The patrol of four men had almost completed a sortie of a sector and were on their way to the base camp, when it became painfully obvious that they were lost. The map didn’t make sense. The compass reading was off. Overhead, a bank of clouds threatened to release the torrents of rain so characteristic of January in the subtropics. No stars. Not even the moon.

And then a single shot rang out. One loud bang in the silence, reverberating across the veld in a promise of death. 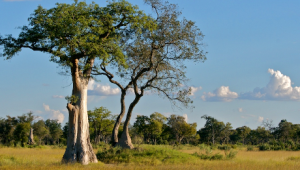 They huddled together next to the trunk of a huge jackalbery tree, whispering in almost-inaudible tones.

I don’t know. That way? The darkness prevented the others from seeing which way the trooper was pointing.

Doesn’t matter. Somebody out there is taking potshots at somebody. We have to get out of here.

Another shot rang out. Nearer this time.

Vetfaan took out the faulty compass to study the luminous needle behind a cupped hand.

Let’s just adjust the bearing by about thirty degrees, and follow the compass. We should get to a river sometime, then we can follow it to the base. It’s upstream, if I’m correct. Let’s go.

Nobody argued. That’s the way it worked. Somebody made a decision and the rest followed. If the decision turned out to be wrong, they’d all pay the price for it. But, unless you could come up with something better, there was no other option.

About half an hour later, Vetfaan almost stumbled over the man waiting in ambush next to a faint game trail. This man – a Cuban, they later discovered – was the first in a line of nine soldiers, waiting for them to enter a killing zone that would have wiped out the entire patrol. Vetfaan didn’t think. Reacting instinctively, his huge hands found the man’s neck, choking hard to prevent the hapless soldier raising the alarm. With the man writhing desperately to loosen the grip, Vetfaan turned around and walked his patrol out of the area.

“Did you kill him?” Precilla’s eyes are wide with fear, her lips a thin line of disgust. War has never made any sense to her.

Vetfaan manages a wry smile. “No, I didn’t. He was a small bugger, poor chap. I dragged him to a spot where we thought we’d be safe and then made him sit down. He could speak broken English, so I told him we’d let him live if he could tell us where we were. Man, you’ve never seen a guy so happy to tell something to his enemies. So we took his gear – he had dropped his rifle when I grabbed him – and made him take off his shoes. Told him to stay right there until the sun came up.

“The funny thing was: we were all equally afraid. The darkness in Africa didn’t discriminate. Everybody couldn’t see a thing. It was as big a curse as it was a blessing….”

The group at the counter sits in silence, each lost in own thoughts as they remember the dark days of the Border War.

“Ja,” Servaas says, “it was dark in many ways. Many young men got lost there.” Vetfaan knows the old man isn’t talking in geographical terms.

“And now it’s the same for America and those guys with the Islamic State.” Gertruida, who had been deeply involved in Intelligence during the 80’s, sighs sadly. “They’re following a faulty compass…again. Imagine beheading innocent people to intimidate the rest of the world? Instead of creating sympathy for their cause, they are making it easy for Obama and Cameron to retaliate.”

“It’s the same thing, Vetfaan. The world has heard a few random shots. They tried to ignore it, or at best, to avoid confrontation. Then IS ambushed them with these atrocious, inexcusable, inhumane acts. Avoiding conflict is no longer an option. We’re heading for a full-out war, I’m afraid.”

“But the powers-that-be are going about it in a wrong way, too. I heard the overseas media tend to blame all Muslims for the situation.” Boggel pours another round before Gertruida continues. “And I don’t think that’s right. They’ll split the world down the middle by polarising Christianity and Islam. That’s like taking us back to the days of the Crusades, which I fear is happening all over again. Remember; in the first millennium Christianity was a religion of peace. It gained popularity because of this appeal. Then Pope Urban II called for a crusade against the Muslims, and that changed the history of Europe and England radically. Feudalism disappeared. Crusades were fought for heavenly rewards, but the noblemen returned home as impoverished individuals who bankrupted their estates. It established xenophobia as a ‘just’ cause, sanctioned by the Church. I can go on and on about the positives and the negatives to emerge from the Crusades, but the bottom line remains: millions were killed, countries were changed and society – and religion – didn’t escape unscathed.”

“So, once again, the moral compass is way off mark?”

“Yes, Vetfaan, it is. IS is moving in the wrong direction. The West is straying off a peaceful path by labelling all Muslims as radical – this is simply fuelling xenophobic fear. God knows how this will play out, but this time I can’t imagine a peaceful ending. You were lucky with that soldier you stumbled across; but I afraid  you won’t find a handy Cuban in the Middle East today, unfortunately.”

14 thoughts on “When the Compass Fails.”