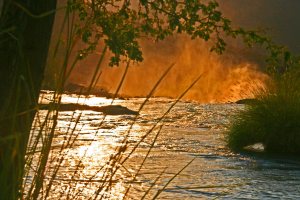 Gerttruida is running as fas as she can. She hears the wind roar past her ears as her legs move at maximum speed, her feet constantly slipping on the oily surface of the smooth cement. As far as she can make out, she’s in an underground passage, stretching away ahead of her. The overhead halogen lights are flickering, almost in Morse-code, as if warning her to go yet faster and faster.

She can hear the breathing behind her: untroubled, regular, calm. A total contrast to her rasping, burning gasps as she attempts to get away, away, away…

Moments before, she was sitting at the desk of Neil Barnard…or was it Jacob Zuma? Or were they both there, morphed into a single person with an ominous smile and unreadable eyes? Cold eyes, calculating eyes, fixed on the big red clock against the shimmering wall with its both hands on the 12.

“You can’t get away, Gertruida. It’s too late. The clock has stopped, your time is up.” The accent is a strange combination of African and Afrikaans; the words uttered in an unearthly growl.

She doesn’t know what was too late, nor does she know why, but she knows with unwavering certainty that there is no more time. It’s finished. If she didn’t escape, she’d be devoured by the monster.

Aaah…a light! She must get to the light! Only then does she notice the firing squad kneeling behind the spotlights: men in camouflaged uniforms aiming automatic weapons straight at her face. When she skids to a halt, a million spiders descend on her, crawl up her legs and poke their long legs into her nostrils and mouth. Frozen by fear, she isn’t able to move at all. Behind her the monster closes in, folding a hairy arm around her waist. She prays for the firing squad to end it all…

Stoney’s voice is loud in her ear, and she wakes up with a start.

“You asked for a nightmare, so that’s what you got. Are you convinced now?”

She shakes her head to clear the cobwebs. “Dammit, Stoney! You could have killed me!”

“Ja, these dreams are extremely graphic, aren’t they? Seems all too real. But, in the end, they remain just that: dreams. The terror-dreams  are the best. It’s like you can’t escape. Mine is a lion with huge teeth.” He uses his fingers to show how long. “And I can feel his hot breath on my back as I scramble through the bush. Can even feel the thorns on the branches tearing at my skin. It’s so real, I’ve considered going to sleep with my shotgun next to me.”

She arrived at Onkruidbult the previous afternoon to see what Stoney is up to. He entertained her with his stories of funny dreams, sad dreams, nightmares and happy dreams, before they sat down at his new dining table to a scrumptious dinner of leg of lamb and pumpkin cakes. Stoney avoided all her questions until at last he asked her what type of dream she’d like to have that night. She didn’t hesitate: not known as a frightened woman, she insisted on a nightmare.

Now, with dawn only minutes away, she sits up to stare bleary-eyed at Stoney. “I’ve never been so scared  in my life! Wow! It was terrible…”

“You took a long time to get to your dream, Gertruida. I sat here all night waiting for some sign that you’re dreaming, and it only started a few minutes ago. Some individuals scream and shout, but you just panted. I must say, it is very rare for somebody to request a nightmare. Mostly they want happy dreams…some even of a …er…sexual nature. Those dreams are so popular I can’t keep up with the demand. The politicians usually want victorious dreams, while artists commonly want dreams of inspiration. Those are much easier to supply.”

“But how do you do it, Stoney? This is phenomenal! Didn’t you drug me, or something? You gave me that little chocolate after dinner…”

He laughs heartily. “No, no drugs, Gertruida. You’ve seen my house – I don’t have a laboratory or anything like that. Only a kitchen. Yes, it’s the chocolate, but that’s as much as I can tell you. If there’s one thing I’ve learnt in my life, it is that you can’t trust anybody. Once you’ve told a secret to one individual, it’s not a secret any longer. And the next thing you know, the grannies are talking about it at the bridge club. No, I’m not telling. But tonight I’ll give you something more…delectable. You’ll enjoy it…”

They spend a lazy day on the veranda in front of the house. Gertruida still feels a little unsettled, but she brought along a stack of National Geographics. Stoney seems content to sit and doze in the sun.  When dusk arrived, Stoney cooked some chops on the fire, adding a pot-bread he prepared that afternoon. Once again he regaled her with stories of the type of dream she might encounter.

This time, the carefully wrapped chocolate was followed by a rich brew of coffee and a promise that she wouldn’t like to wake up.

In the months to follow, Gertruida will wish she could have another dream like that. She was young, voluptuous and ever so slightly drunk when the yacht dropped anchor near the deserted island. The pristine beach, the swaying palm trees and the fragrance of frangipani created an alluring invitation to swim to the shore and explore. It didn’t worry her that she was alone on the yacht – it was a minor technicality of no consequence. She didn’t guess…she knew that he would be waiting for her.

He was the nameless hunk she had dreamed about when she was sixteen. Tanned, ripped muscles, sparkling eyes and an irresistible smile. Body sculptured to perfection and a mind to match. He, the childhood (and childish) imaginary companion with the strong arms and the soft voice.

She was right, of course. He waited behind the ferns in the long grass next to the waterfall. Ahhh…he was magnificent…

This time, Stoney was kind enough not to wake her when she moaned softly. He just sat there, dozing quietly next to her bed. When she woke up at last, he left her to savour the afterglow of the experience…