Gertruida gets up, walks to the window and stares out at the veld. It been another dry year. A lazy dust devil does a desultory little dance in the distance before dying quietly. There is nothing green growing in the red sands of the Kalahari right now, but she knows it’ll change as soon as Nature blesses them with a bit of rain.

‘So what happened, Gertruida? With the Bothmas and the wind and all that?’ Vetfaan gets frustrated when Gertruida doesn’t tell the whole story. She, of course, understands the art of telling stories – it’s much like all else in Life: it involves a balance of patience, curiosity, a bit of prodding and a lot of imagination.

‘Oh, the Bothmas?’ Gertruida smiles. ‘Yes. They did make an interesting bit of history, didn’t they?’

Loser was 52 years old and immensely rich by 1800’s standards. Worth more than   £10,000 when the cards were turned, was way beyond anything he could have dreamed of. But just about right for the barmaid who served the table that night. The Randlords invited Loser to play on, knowing they could fleece him if they had enough time, but the barmaid put a stop to that.

‘Mr Rhodes, my father is not a young man any more. He needs his rest. Allow me to take him home and then maybe, if he wants to, you can have a return match sometime in the future.’

‘Your father?’ Rhodes polished his monocle, put it back, and peered at the two. Yes, she just might be young enough to be Loser’s daughter. And yes, she was looking fondly at the old man. ‘Well. Haarrumph! I suppose that would be in order. Go on, shoo! We still have to get going with our game. Don’t just stand there – off with you!’

Loser stood transfixed for a while. What? This girl was certainly not his daughter and they had no ‘home’. And the invite to play on, was so tempting. But then he looked at her again. Looked, and really saw her for the first time. Her bright blue eyes were searching his face, pleading him to go. And she was very, very beautiful. Loser nodded. Winning a poker game and going ‘home’ with this young lady was almost impossible to imagine. The money in his pocket, the share certificate and the woman – these were all real, after all, and left nothing to the imagination. And, just like he reacted when he found the blue diamond, he did the right thing. 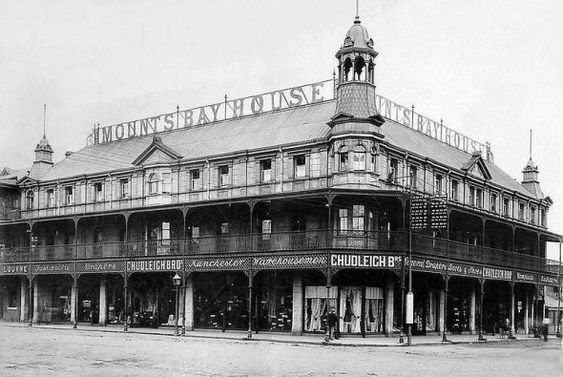 In those days the Mounts Bay ranked amongst the top hotels in Johannesburg and that is where the pretty barmaid steered the euphoric old man. Along the way, she introduced herself.

‘I am Molly. Molly Richards. From Dartmoore, but currently staying in Braamfontein. A rented room. For one.’ It was dark already, but he saw her looking up to him, checking to see if he understood her message. ‘I came out with me father. He is…was a blacksmith, but he died last year. Dysentery. It happened so quickly. One week he was hammering horse shoes, the next, we buried him. I had to find work…’ She put a small hand on his arm. ‘I’m sorry about lying that you are me dad, but I’ve seen them empty many a pocket with that poker of theirs. I didn’t want that to happen to you.’

She knew about the Mount Bay. Some of the rich people who had their racehorses shod by her father, had lived there. She went there once or twice with invoices that needed settling. ‘You go there, Mister. Get a bath and a good nights sleep. And don’t even think about gambling your stuff away, understand? Don’t be a fool.’ She hesitated. ‘If you want, I’ll come back tomorrow. Help you buy some decent clothes and get a shave and haircut… But only if you want, see? I’m a decent girl. Me father taught me manners.’

Gertruida sits down with a sigh, winks at Boggel for another beer. ‘The family does not know whether Molly went home that night. What is known, is that the two of them got married and that she had a baby a year later. 1895, that would be, or early 1896. It was a boy, Cecil John Bothma. He  was born to sorrow and hardship for the first twenty-one years of his life. Oh, how he suffered!’

Molly Richards died shortly after the birth. ‘Puerperal sepsis was a huge threat back then. That left Loser with a helpless infant he had no idea how to care for. In desperation, he got hold of a wet nurse, one Grace Newman, who did not take after her first name. She managed to feed the infant, but she also had a keen eye on Loser’s fortune. Over the next ten years she slowly – and with great cunning – managed to spend most of the money Loser had won from Beit. Only the share certificate remained untouched, simply because she did not know what it was. She and Loser was in some sort of love-hate relationship. He drank heavily and in his drunken state he’d seduce her. Or her, him. Who knows. But when he was sober he hated the very sight of her.

‘He came home one night, drunk as a lord, and ordered her to bed. At the time he was almost broke and they lived in a shanty out near where Roodepoort is today. Grace refused. Loser got angry. They fought. He hit her with a cooking pot.’

At the inquest, it was found that Grace died as a result of blunt trauma to the left temple, which caused a skull fracture and bleeding on the brain. Loser was found guilty of murder and sentenced to ‘hang by his neck until he was dead’.

CJ Bothma, the boy, was twelve years old when his father was hanged. All he had was some clothes, a battered suitcase, a pack of cards and the certificate.

‘He had no idea what that paper meant, see? Couldn’t really read at that stage, either. Due to the abusive situation in the family, he had learnt quite early in his life to mind his own business. Don’t ask questions, don’t get involved. He spent his days on the street. At first he played with friends, later he sold cigarettes – single ones – to passers-by. When Loser was taken away, he made ends meet by running errands. Simple jobs. Take this here, take that there. That’s how it started. Today’s Bothma Couriert Services – BCS- the international company, started with a twelve-year-old delivering letters, groceries and goods in Braamfontein.’

His business took off slowly. After a few months he had to buy a wheelbarrow. A year later he had three street urchins working for him.

‘By the time he was twenty-one, he had quite a network of boys – black and white – working for him. It wasn’t a lucrative business at all, but it did provide simple lodging and food. CJ understood the hardship a child on the street endures and he had a good heart. He also saw what money did to his father and to Grace. Money was not to be his key to happiness. Caring for others was the answer. It was 1917, and the Big War was drawing to a close. Just before the Spanish Flu. His luck was about to change.’