‘CJ was one of the first to start coughing in September 1918. At first he thought it was the usual cold or flu he was prone to, running around in the wind and rain while doing his errands like he did. But then he got sick. Really, really sick. It was the best thing that ever happened to him.’

When Gertruida tells a story like this, Boggel always arranges with Precilla to bring in snacks – meat pies, sandwiches and biltong. It is good for business. The whole town is there to listen and they like to drink something while eating and listening. Gertruida – who knows everything – knows she will be served free of charge. Boggel says it’s her commission.

Anyway, the Rolbossers had nowhere to go. Upington and Grootdrink were still in lockdown, so there was no sense in leaving the town. Boggel has a well-stocked store-room. Why leave? Especially when there is such a good story to share.

CJ never considered going to hospital. When he got sick, the big wave of Spanish Flu cases hadn’t hit South Africa yet. In fact, very few people knew anything at that stage about the flu that would terminate the lives of half-a-million South Africans. He was also fortunate that he got the earlier, milder form of the disease. It was the later mutation that was so lethal. With so many mouths to feed and so many street children to look after, his errand business – a primitive courier service – did not allow for any luxuries. If you got sick, you got in to bed and waited for the fever to go.

But this flu was different. It didn’t want to go. CJ got sicker by the day and started coughing up green phlegm. That’s when the little yellow child, the one they called Geel, offered to help. He was one of the fasted runners CJ had, a reliable young teenager with lively eyes and a ready smile. 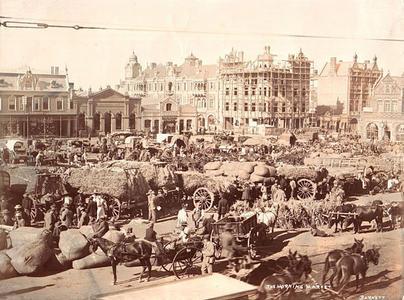 Geel could speak enough English to get by, but his first choice was the language of the Khomani people. His father was from the Kalahari from where he had traveled, much like Loser, first to Kimberley and then to Johannesburg. Geel never mentioned his mother, who apparently stayed behind. His father, Tsung (actually !Kung), worked as a helper for a butcher on Market Square.

CJ scoffed. ‘Your father? The meat-man? What – is he a doctor now?’

CJ remained skeptical. The discussion went nowhere. Geel did not understand why CJ was speaking about a white man’s shaman. Why, was he not offering the wisdom of his very own father? Why would CJ be so disrespectful to his family?

‘Forget I speak of father. You go doc-ter. I don’t see you no more.’ Geel left CJ lying in a pool of sweat and left in a huff. Two days later CJ sent a message, pleading with Geel to fetch his father.

Tsung was maybe 40 years old, but looked to be 80. He was shrivelled, wrinkled, bent and arthritic. He arrived at CJ’s shanty after work, just as the sun was setting in the west. He did not introduce himself as he sat down – on the floor – next to the bed. He sat there for a long time, just looking at the sick white man and listening to his breathing. He never touched him at all, nor did he say anything. After what seemed an eternity, he got up quietly and left. CJ would have laughed if he wasn’t so ill.

The next morning Geel arrived with a small pouch filled with a rather pungent powder. He was so short of breath and weak that he only managed a weak ‘What?‘

‘Father sent, He say you may die. Maybe. Perhaps. This is help. You make so.’ Geel imitated the action of somebody taking snuff, taking an imaginary pinch and sniffing the powder. CJ tried it. He almost passed out coughing.

‘The story goes that he first almost died coughing before he coughed himself back to health.’ Gertruida is obviously enjoying the story as much as her audience. ‘But, two days later the fever broke and the next day he started feeling better. There was no doubt about it, the powder did magic. He sent Geel to fetch his father, thinking to thank him. Geel would have none of it. He said if you wanted to thank somebody, you went to him. It was rude to summon somebody who helped you.

‘Well, CJ got up, walked to market square and apologised to Tsung. He said he was doing things the white man’s way, which may certainly seem rude. But, more than just saying sorry, he also expressed his thanks. Tsung smiled and nodded. Yes, he said that’s allright.

‘Then CJ did the smartest thing in all his life. He asked Tsung what was in that powder. That one question changed his life. Forever.’