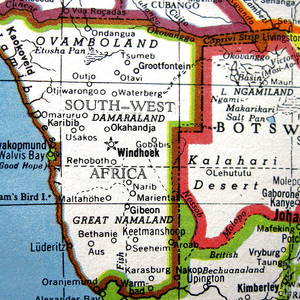 ‘While the whole Riemvasmaak community was forced to comply with the defense force’s demands to move, Geel escaped back to civilisation. He was an articulate, educated man in his sixties, respected for his entrepreneurial skills and the easy way he had with strangers. Mr Gibson, the manager CJ had appointed many years before, welcomed his friend from the Kalahari with open arms. Together they set about expanding BCS – Bothma Courtier Services – to satisfy the international demand for the secure transfer of documents, packages and even money.’ Gertruida brightens at the thought. ‘The two of them were really a remarkable team.’

It took many months for the Riemvasmakers to settle in remote Damaraland; in the area they were supposed to stay there was no real infrastructure. Susan insisted that she and Herman remain with the people she loved and very soon it became abundantly clear that Herman would have his hands full, taking care of everybody. Babies were born, stomach and lung problems were common and malnutrition took its toll.

Soon, however, Herman’s services were in demand on a far greater scale. There were no doctors for many hundreds of miles around the new settlement. Farmers and their families, their workers, policemen, missionaries and travelling salesmen soon queued up in front of the tent they stayed in. Within six months Herman had to build a small building to house a clinic. Medicines were brought in (later via BCS!) from Windhoek. And before he could build a house for them, the first of several rooms were added to the clinic, to house much needed beds for the sick and infirm.

‘Yes,’ Gertruida says, ‘they did get married. Right there, in front of their tent, by one of the German missionaries who had come for treatment of his gout. It was a simple service, but the entire community turned out to witness the start of an amazing marriage. Their meal on the day? A barbecued chicken, donated by the ululating crowd around their tent. At least, the missionary paid for his treatment with some sherry. As far as honeymoon nights go, it must rank as one of the most strange, ever. True to their nature, the newly-weds smiled and took it in their stride.

‘Some time later Herman suggested that they hand over the reins of their businesses to Geel and Mr Gibson. Susan had been the only heir to CJ’s estate and it was impossible to manage the growing little empire from the wilderness of Damaraland. Susan immediately agreed and so Geel became the owner/CEO of CJ’s legacy. He did send a portion of their profit to the people in exile every month, and it did a lot to make their lives easier.

‘Susan, in the meantime, studied Herman’s books and became a rather efficient pharmacist and assistant in the busy practice. She also assumed the role of mother to the Riemvasmakers, listening to complaints and helping out where she could. 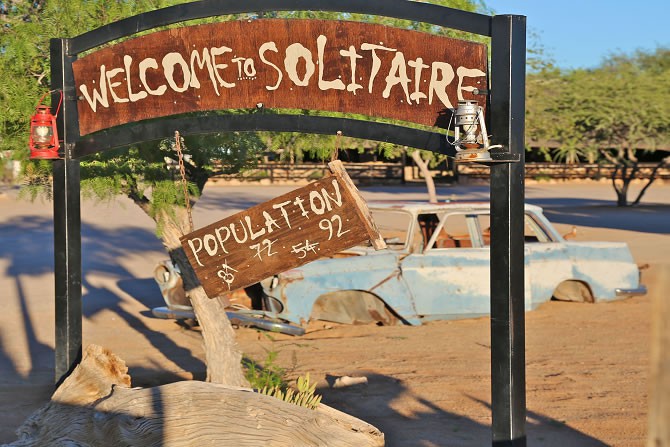 ‘Griet Loper springs to mind when I tell you about that time in Damaraland. The Riemvasmakers were a determined, hard-headed bunch. No government was going to force them into being second-rate citizens. Griet was a restless soul and eventually made off with a small bundle of clothing. Just took to the road and kept on walking. Eventually, she came to a little cluster of buildings next to the dusty road with the name of Solitaire. The kindly owner, a Scot by the name of Moose McGregor took pity on her and employed her in the kitchen. In those days Moose sold petrol along this long and corrugated road to the coast and he thought it a good idea to make an extra buck by selling refreshments.’

Much to Moose’s surprise, Griet produced a real German apfelstrudel one day, using some left-over apples a broke traveler had exchanged for a cold Coke. Griet used a recipe handed down by her great-grandmother, who had been a cook to a German garrison stationed at Numatoni, in the Etosha region. Of course, that was before the horror of the war against the Herero’s, which almost wiped out that entire nation. Incidentally, that war was the reason why Griet’s family fled South West Africa to settle in Riemvasmaak, in the beginning of the 1900’s . ‘Well, that apple pie was something else! Moose McGregor became famous for his delicious apfelstrudel, a reputation that is alive and well today, even after his death. Needless to say, Griet’s future turned out to be a happy and content one in the many years she spent at Solitaire.

‘Oh,and there’s Lena, Mama Namibia herself. Came from Riemvasmaak as a young girl, but, wow, did she turn out to be a gem! Today she runs Wilderness Safari’s luxury Damara Camp in the remote Damara desert landscape, a woman of importance! And what about Petros Sand, the man who started farming with vegetables in the fertile Swakop River bed, near Swakopmund?

‘But I digress,’ Gertruida sighs, ‘the most important part is still to come. And it involves all of us…’