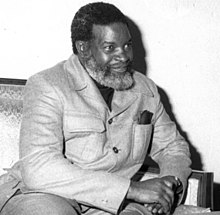 ‘When Mandela became aware of the plight of the Riemvasmakers in faraway Namibia, he gathered a small task force to investigate the issue.’ Gerttruida has just told them about Namibia’s independence. In Winhoek and Pretoria new bonds were formed. The National Party was a spent force and Sam Nujoma, the SWAPO president was keen to enhance the relationship with his southern neighbour. After all, the two countries had common goals … and problems. One such problem involved the displaced people in Damaraland.

Even back then, Gertruida (through her involvement with the secret services) had the reputation of knowing everything. She was co-opted into a think-tank (politicians call it a committee) to not only investigate the situation, but also to find a solution for the problem.

It was her suggestion to involve Geel, the man who had done so much to help the Riemvasmakers in exile. Geel Kruiper was, at that stage, a man deep into his eighties; a dignified figure and a respected businessman. He had, however, never forgotten his Riemvasmaak roots.

The solution was an easy one. Bring back the displaced community and resettle them on their ancestral grounds. Geel not only chaired the bilateral talks between South Africa and Namibia, he also involved the elders of the community in Damaraland.

‘And so, the Riemvasmakers finally resettled in Riemvasmaak in 1995 and ’96. The older generation rejoiced and the younger group hoped for a better life. Each family was allocated the ground they had vacated, and, in a unanimous vote, Geel was awarded the house that CJ had built after WW II. It was, as the elders put it, a gesture of gratitude for the many years Geel had supported them all.’ Gertruida sits back with a satisfied smile, ordering another beer.

‘Ag, come on, Gertruida! You never told us that before! Did you really, really help the Riemvsamakers get back to the Northern Cape?’ Vetfaan can’t believe his ears. After all these years, and this is the first time he’s heard this?

‘Well, the hard work was done by Geel. I merely acted in an advisory capacity, because I knew the facts better than the politicians, understand? And anyway, South Africa had bigger problems to solve in the early 90’s. The negotiations leading up to the first democratic election is 1994 involved many, many days of talks and promises, undertakings and guarantees – most of which seem to have fallen through holes in the fragile fabric of our current dispensation. Once, we all believed in our special Rainbow Nation. Now we recognise that illusion as a dashed and desperate dream used to hoodwink an entire country.’

‘Okay, okay.’ Sevaas knits his bushy eyebrows together. ‘So you saved them all. Well done.’ Servaas has the ability to prick the most colourful social balloon with the icy needle of his sarcasm. ‘I have three questions. You must finish the story, Gertruida, and not leave us dangling in thin air.’

‘What about Geel? what happened to him?’ 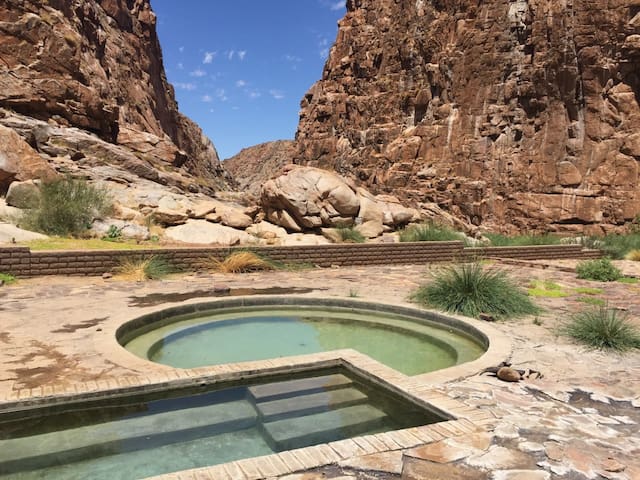 ‘Oh he lived a full and happy life. He never married and retired near the Riemvasmaak settlement – just around the corner from the hot water spring. He died at the age of ninety-three, leaving all his possessions to a variety of beneficiaries. In his later years he spent a lot of time advising the elders and raising funds for university bursaries for the Riemvasmaak children.’

‘Oh.’ Servaas seems disappointed. Did he hope for something more…spectacular? ‘And what about Herman and Susan. Did they simply disappear?’

‘On the contrary, Servaas. By the time the Riemvasmakers returned to South Africa, Herman Viljee had built up not only a busy practice, but his hospital serviced communities from Ovamboland in the North, right down the Marienthal in the south. He faced a harrowing decision, but had to make a choice. He and Susan stayed behind in Namibia. Unfortunately, they never had children, so the Bothma dynasty died with them, The good news is that the medical faculty in Windhoek took over the hospital, which now acts as a training facility for young doctors and aspirant nurses. Herman is revered as a pioneer of medical training in Namibia, where his name still commands respect. Susan, especially, was a staunch fighter for women’s rights – they even erected a small monument for her in Khorixas.’

Servaas remains silent for a second. ‘Well, boo-de-hoo. So this whole story fizzles out into…nothing?  What’s the point, Gerttruida? Why even bother to tell it at all? Where’s the so-called Happy Wind? What you told has absolutely bugger-all to do with any sort of wind, let alone a happy one.’

Gertruida has to concentrate to keep a straight face. Hook, line and sinker, Servaas! She takes a deep breath. ‘Oh, Servaas, ye of small faith and such limited insight. Please allow me to enlighten you….’