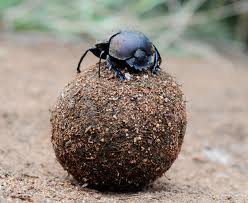 “Now the dung beetle, Mister Vetfaan, is a very clever animal. People look and they say: it’s just a dung beetle, but they’re wrong.” !Ka holds his hands out to the fire. It’s not quite autumn yet, but there is a distinct chill in the evening breeze. “Look, he does not go hunting for food or anything like that. He’ll see a herd of animals – he is very good at finding them by smelling the air – and he’ll go there and wait. He knows there’ll be some dung if he is patient enough.”

Vetfaan is fascinated by !Ka’s knowledge of the desert creatures. During !Ka’s infrequent visits, he’ll always steer the conversation to the veld and the animals that somehow survive on the arid plains of the Kalahari.

“So the gemsbok and the eland and the elephant – they walk long distances to get enough food. Dung beetle waits. What goes in, must come out. And that dung is already half-digested; he doesn’t have to do much to chew and swallow and digest. He feeds on the dung and grows fat. That’s what he does.”

“Ah, Mister Vetfaan, that’s his wealth! The more dung, the bigger the ball. And the beetle with the biggest ball, is the richest. The lady beetles watch the man beetles very carefully. The man-beetle with the biggest ball of dung, is the one that can choose the female he likes. Lady beetles like a big ball of dung. They’ll mate with the man-beetle who has accumulated the most dung, because that’s where they’ll lay their eggs.So they choose a rich man, so their eggs can hatch and start feeding on the ball. It is all very clever, Mister Vetfaan. If a beetle rolls only a small ball, he doesn’t count. He must collect a lot to be an important man amongst the others.

“Once he’s gathered his dung, he’ll start rolling it across the veld to a soft spot, where he’ll bury it. The other beetles will wonder what happened to his dung, but he won’t tell them. It’s his secret. And one day, when the little beetles appear, the others are so surprised.

“These beetles will become more and more, Mister Vetfaan, as long as animals produce dung. Maybe they’ll be the last living creatures left on earth after everybody dies, who knows?’

Vetfaan walks into Boggel’s Place to hear the buzz of conversation.

“Hey, Vetfaan, Oscar managed to get bail! Can you believe that?” Precilla is excited – she still can’t get to grips with the recent events.

“Gee man. Now the lawyers are going to have a field day. They’ll dig up dirt left, right and centre. They’ll discredit witnesses, find forgotten transgressions and figure out ways to make the judge doubt anything the opposition says. It’ll be a merry dance with facts and truths, mixed with innuendos and suggestions. It may become quite messy.” Kleinpiet makes little dancing steps with his fingers on the counter top.

“Aw, that’s nothing. The social media will go to town. Here people can say just what they want – and I understand they’re already doing so.” Boggel is on his crate to join the conversation. “The things they say there…” He lets the remark dangle in mid-air, like good barmen do.

“Don’t forget the media.” Gertruida gestures towards the much-read Upington Post in the corner. “I can understand the lawyers scurrying to get grounds for their arguments; but the media people don’t have to stick to hard facts. They’ll interview families, friends, coaches, team mates, managers and policemen. They’ll quote confidential sources. The magazines will have pictures of Oscar as a baby. Some fool will trace the surgeon who amputated his legs. It’ll be much more than just a dance – it’ll be a circus.”

Vetfaan shrugs and orders a beer.

“There’s nothing new in nature,” he says. “I’ve just been talking to !Ka about exactly the same thing.”