The challenge: tell the story behind your writing. Why do it? 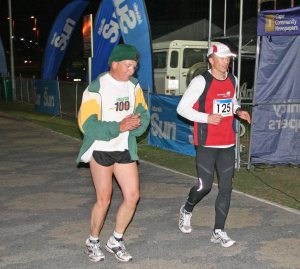 This is up close and personal, but on a special day like this, I suppose it is only right to say something about my crazy dream to become a writer.

Way back in 1994 many things happened in South Africa. We buried Apartheid and became a democracy. That was a major event, the culmination of lots of talks, massive political posturing and a bloody war. It is not surprising that this is why 1994 will be remembered. What never reached the headlines, was the slightly overweight, middle aged man who took up running. It is true to say that it changed my life more than the politics did. Running became an escape from an unhappy background even more than it helped me get back into shape again.

I loved the long runs and the ultramarathons. It gave me time to think. It also became the time I could talk to God – which eventually resulted in Facing Surgery with Christ and later, SHIMMERstate. Back then the editor of Runner’s World offered me a column and I took up the challenge with great joy and some trepidation. The column ran for a few years and got me into the routine of regular writing. The two things – running and writing – became a common challenge, urging me on to try to do better every time.

Well, my running got better, at least. I’m still working on the writing side.

Eventually, after attaining permanent numbers in the Two Oceans, Comrades marathons and Golden Reef 100 miler, I reached the goals I set myself for running. I was getting older and slower. I started looking at reasons to stop writing as well – but found out that the lure of writing something significant just wouldn’t let me go.

In the meantime, my children took up running. This turned out to be one of the best things we share as a family. The silence of the long-distance runner is much more than not talking. It’s a sharing of a very special passion. How many miles did we slog off in the pre-dawn hours? How many races did we complete, smiling in understanding while the odd tear threatened to embarrass? How much did it contribute to the mutual respect we have for each other to this day?

The answer, my friend, is blowing in the wind. I still jog. Here at the coast it is not at all uncommon to to find the breeze quite strong when I do my old-man shuffle on the beach. That’s when I hear the voices of my kids, telling me I just have to hang in there, I can still make it. The finish-line, they say, isn’t a tape strung between the winning posts. No, they declare, I have to pursue my dreams and keep on believing that someday, somehow, my writing will be as good as I can get it.

That, of course, is the answer. I never won a race (although it came close once or twice)(well, once, to be precise, okay?); but every race left me with a wonderful sense of achievement – and wondering if I could do better. You may say that my racing caused euphoria and a feeling that there may be more. Not depressing, mind you, just the call to try harder next time. And as with running, so with writing. I still hope to improve.

A few books later – and with three more in the process of writing, editing and polishing – I’ll quicken the pace on the downhills and slog it out on the upward slopes. I know I’ll never be the recipient of an internationally acclaimed literary prize – but what the heck, I’m having the time of my life. The joy of moulding a story into something readable remains the reason why I’ll toe the line every time the muse starts whispering sweet nothings in my ear.

Today is a special day for me. Son Hannes is doing his tenth Two Oceans Marathon as I write this piece. I look at him and I recognise the determination, the gritting conviction, that completing the race is what it’s all about. Sometimes the medal is a nice reward, sometimes the silver turns out to be a bronze. It really doesn’t matter, does it? But I know – when he crosses that finishing line at UCT – he’ll be smiling. He’ll promise himself that this was the last one, and never, never again.

And I know he’ll be out on the road again in the pre-dawn chill, pounding the tar with renewed energy one of these fine mornings. Strange, writing does exactly the same thing to me. Every time I close Microsoft Word, I think I have done all the writing that I can. And then…

So, today I dedicate this post to Hannes. Run well, my son. Finish well. And don’t donate your running shoes to some charity – you’ll need them soon again.

And my marathon with writing? I think I’ve passed the halfway mark. The course is getting difficult now. Fatigue has become an enemy..and a friend. It tells me to slow down, but it also tells me that the ultimate piece of writing within me must be getting closer.

I look forward to the full stop at the end of a perfect essay. At the same time I know: in this race of writing, there is no finish line – just the anxious joy of lining up at the start every time I sit down at the keyboard. So maybe writing is a marathon with no end – a race where the prize is in competing, not giving up, and smiling bravely when the going gets tough.

The finish line beckons, Hannes. Go for it. Show the world what you’re made of. Wipe the tear with pride when they hand you the medal. And know you’ll be back again next year, pounding your way up Chapman’s Peak with the wind in your face and the steady rhythm of your stride carrying you onwards.

That is the beauty of running. It is also the joy of writing.

With luck, we’ll both make it.