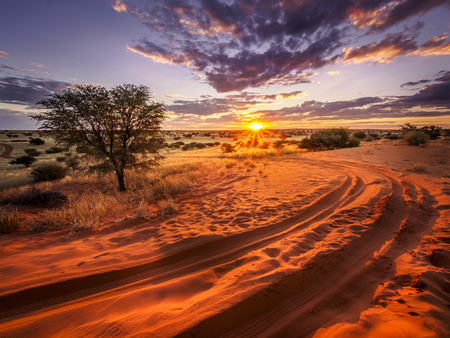 Gertruida gets up to look at the sunset. It’s been a long day and the telling of the story has left her feeling drained, empty. She must finish it now – she owes that much to the group waiting to hear the end. Hopefully, she thinks, they’ll understand why – when she’s done.

Returning to her seat, she accepts a fresh beer from a pensive Boggel. The bent little barman has a sensitive ear for the unsaid word – he must have known she was not only telling a random story. She must have had a reason…

‘You see, Servaas, Geel specified certain things in his last will and testament. He was very specific about it.’ She opens her large handbag to take out a document. Boggel can see the heading: Last Will and Testament.  ‘Amongst others, he left his – that is CJ’s house – to me. He said it was for the help I rendered in repatriating his people, and he did it on condition that I use the place to promote harmony; not only in the Riemvasmaak community, but also in the greater South Africa.’

Of course this statement causes quite a lot of talk – congratulations, excitement, curiosity and more. Only once the hubbub died down, can grumpy old Servaas repeat his question.

‘And the wind, Gertruida? The so-called Happy Wind? What about that? You never even breathed a word about that?’

He gets a sympathetic smile from the wise woman. ‘On the contrary, Servaas. The whole story has to do with that wind. Think about it….’ Gertruida punctuates the points she make by folding her stretched fingers into her palm as a way of numbering them. ‘First there was Loser, who accidentally found a priceless diamond. That led him to  the Randlords…and Molly. Then she died and the poor man ended up as a true reflection of his name. His son had to start running errands, which eventually became a business which supported many people. Geel became a kingpin in the business. CJ Snr met Francina, loses a leg and hides from society in Riemvasmaak. Later, Susan was born. Then Susan meets Herman because of Francina’s illness.  Later still, when CJ Snr required assistance, Susan and Herman starts taking serious notice of each other. And then politics enter the arena and the two of them set off to Namibia with the Riemvasmakers. Eventually they return to their ancestral ground and I get involved with their repatriation. And guess what? Geel features again…

‘Don’t you see? It’s the Wind of Fate, the Wind of Chance, the Wind of Providence! It is, quite frankly, the Happy Wind of Love and Life. It plays with us, steers us, pushes us along. Without this wind, we would not have been here, let alone talk about the Bothmas. It’s the Happy Wind which blows through everybody’s life, bringing them to opportunities, dumping them in problems and serving them love. We call these events coincidences or happenings by chance or random; but meanwhile it is the Happy Wind of Life that blows us this way and that – until we get to where we have to be.’

Later, when everybody has gone home, Boggel shares a nightcap with Gertruida. Barmen, throughout the whole world, have to master the art of understanding – not only of people, but of stories as well.

‘That would have spoiled it, Boggel, you know that.’

Boggel nods. He allows his eyes to travel through the room the townsfolk call Boggel’s Place. ‘CJ really planned it very well, didn’t he, Gerty?’ He points at the hearth. ‘Especially when you consider the cold winter evenings in the Kalahari.’

(How did the story get to this point? The start is here!)