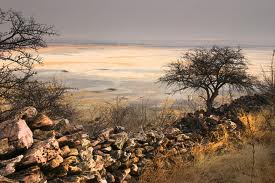 Lost City of the Kalahari?

“We South Africans are good at losing things; I think we must be the world champions in  it.” Vetfaan points to the article on the front page of The Upington Post. “I know we lost our diamonds to England, the gold to some rich men that control the mines, and the platinum to the miners – but this is ridiculous.”

“I read that article, Vetfaan. It’s an old story. The Lost City of the Kalahari is a myth; it doesn’t exist. It started with a man called William Hunt, an entrepreneurial entertainer who tight-roped across the Niagara Falls and had a troupe of performing Bushmen (he called them pygmies) in the late 1800’s. He changed his name to The Great Farini to draw bigger crowds; but it was from the Bushmen that he learnt about a lost city which contained fabulous wealth. He set up an expedition and returned later to tell the world he had found it. However, Laurens van der Post – later the godfather of Prince William – and many other explorers tried to find it without success.” Gertruida refuses to be fooled by stupid rumours.

“But that proves the point, Gertruida. If they found it, it can’t be a lost city anymore. No, they must have lost it good and proper. If so many people looked for it, it must be completely missing. And you’ve got to be very, very good to misplace a city like that.” Vetfaan sits back with a satisfied grin – he feels he’s just won the argument.

“Well, I think it’s still in the same place. Nobody sneaked up and stole the whole place; that’s impossible. It simply means people forgot where they built it in the first instance. It’s the memory that was lost, not the city. It’s like when you misplace your handbag – it’s always in the last place you look. It’ll be the same here. Until explorers look in the last place, they won’t find it.” Precilla signals for another beer. “Bricks and roads can’t migrate all by themselves, after all.”

“But it’s like Oudoom forgetting where the church is, or us forgetting where Boggel’s Place is – it simply doesn’t sound right. How can an entire population suddenly develop amnesia when they want to go home one evening?  It doesn’t make sense.”

“No Kleinpiet, it isn’t like that. Sometimes people move away, and the city gets forgotten. Look, in ancient times, there was a huge lake in the middle of Botswana. Today the salt pans remain – but you can see where the islands were. Historians think people used boats to carry gold from Zimbabwe via this inland sea to the Orange River, and thence to the sea. They had harbours at these islands, and some claim you can still see these ruins there. But, because we have no written record of that time, we don’t know exactly what happened. or where. That history is lost, see?”

Servaas has listened quietly to the discussion but now he chips in. “Vetfaan is right. We’re good at losing things. In Paradise we lost our innocence. The old Israelites lost the Ark of the Covenant. Every nation have lost battles and wars. Now we’re set on losing the earth. Listen, that city was just a practice session – we’re playing for the big-time now.”

“Huh?” The logic is lost on Boggel. “How do you move from a city to the world? We’re talking about the Kalahari here.”

“It’s all the same thing. Look – before people came along, nothing was lost. Nobody carried stuff from one point to another – everything stayed where it was. It’s just that we’ve gotten better and better at losing bigger and bigger things. People call it progress.”

“But what if some people stayed behind in that city? Would they be lost, too?”

“Of course not! They know where they stay and they are at home. You can’t be lost and at home at the same time. No, I think that is the perfect place to stay; somewhere nobody knows about. Think about it: no taxes, no politics, no interference. Those guys are in the pound seats – they’re not lost.”

Servaas gets up to leave. “This is a stupid conversation. I still think we lose more than just cities. What happened to respect? To love? To kindness? To helping your neighbour?  Look at our politics: you think we are gaining anything? What about the effect of drugs and AIDS?  And crime and corruption? Other evils? Wake up, guys, we’ve lost so much, there is almost nothing left. But that’s the good news: we surely can’t lose nothing if we don’t have anything. Soon we’ll be loss-free.”

Way out in the middle of the desert, an old couple sits on a sand dune. They talk in hushed voices as the sun sets in the west.

“Do you think there are other people? Out there, beyond the horizon, I mean?”

“Oh, I don’t know, my husband. I think the big birds must have eaten some of them; maybe even a lot. Look, there’s another.” Her finger traces the white line of vapour across the sky.

“You’re right, I’m sure. Come, let’s go home now, before it gets dark and the new stars start looking for us. I think they are more dangerous than even those birds.”

“Yes, and tomorrow you must drag away the sand from our door – the rest of the palace is almost covered by now.”

“We’ve lost a lot, haven’t we? The antelopes are gone, the fountain is almost not giving us enough water, and the rains have stopped years ago. Now it’s just us…”

“Still – while you’re clearing the doorway tomorrow, I’ll clean up the rooms. You never know: some day we might get visitors. Kind people who will help us.”

He laughs – not sarcastically, but in a kind way. “You are such a dreamer, my wife…”

And quietly, silently, without anybody noticing, the list of lost cities is growing. Johannesburg. Durban. Even in Europe and America. And soon, if it isn’t there already, it’s coming to a city near you…

But we can dream, can’t we?