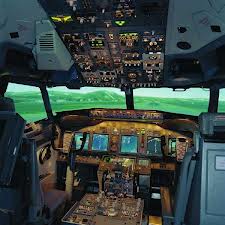 Captain Mokoena is a worried man. It is true that the undercarriage won’t snap into the landing position and that he’s tried everything to override the controls to the stuck wheels; but there’s more. Much more.

The array of blinking yellow and red lights on the dashboard screams danger in a choir of dismay. Not only is there a problem with the hydraulics, but several electrical circuits seem to have failed as well. Of course he radioed the control tower at Upington Airport, but all he got out of them was a long, drawn-out Eiiiish! The controller did, however, promise to call his superior, who at this moment is sipping champagne with the lovely Innocence Matlaba, Miss Kalahari Oasis Casino and Resort, 2013. (No, she hasn’t been crowned yet, but as niece to the Premier of the North Cape Province, there can be no doubt who the judges will choose. Several lucrative government tenders rest on this decision and they’re not about to wreck their individual prospects by voting for the lovely and aptly named Beauty Ngakula.)

This leaves the captain to follow emergency procedures, or at least those he can think might help in this chaotic situation. With no help from the tower, he is the only one able to do something about this catastrophe. First of all, he has to get rid of the extra fuel in the tanks. With the various circuits non-functioning, he can’t dump the fuel. The only solution will be to fly in circles until the fuel has been all but used up. Struggling bravely to keep the aeroplane level, he waits anxiously for word from the tower.

Gertruida spent an inordinate amount of time in front of the mirror this morning, before choosing an outfit for the day. Not too demure. Not too provocative. The denim skirt covers her knees, but she did compromise by leaving the top bit of the frilly blouse unbuttoned. Precilla helped to get her hair just right and there’s no greater expert on make-up than Fanny. Her two helpers had been overjoyed with the result of their efforts.

The arrival times on the big television screen suggest that the flight from Cape Town should touch down just about…she glances at her watch..now. The few other people waiting to greet loved ones, businessmen, as well and the divorce lawyer accompanying Kallie Franz, have all moved nearer to the window to see the landing.

On the plane, Kallie Franz himself  can’t wait to see his soon-to-be-ex-wife and get her signature on the settlement agreement. He wants to see the piece of paper signed, smell it, feel it, before celebrating his freedom. His initial wave of anger at finding his wife (known in the district by the unflattering nickname of Tremblebum) performing intricate and explicit acts of what was described in the court papers as sexual gymnastics with that…that…that insufferable little mechanic, gave way to extreme worry when he realised she had claim on half of his considerable estate in the event of their separation. Now Sly Strydom, the notorious divorce lawyer, has drawn up one of the cleverest, most devious documents he’s ever seen; and this opens the door to keeping his assets safe.

When Mrs Franz accidentally bumps into the attractive women at the window, they exchange apologetic smiles. Two strangers at an airport. Nothing more.

“The plane is late,” she says,  feigned irritation written over her face, “one would think at this day and age…”

“It’s like everything else in the country.” Gertruida isn’t surprised. Even the Upington Post skipped an edition last month.

“Ladies and gentlemen,” the PA announces, interrupting any further conversation,  “we regret to inform you of a delay in the arrival of the flight from Cape Town. There seems to be a technical hitch, but nothing to be worried about. Please be patient, as we are unsure when exactly we can expect the flight.Thank you.”

“Oh my word,”  Mrs Franz seems even more irritated than before. Like some people do, her pursed lips cause the edges of her mouth to curl upwards, causing what may be described as a false smile, but in reality is a cynical grimace.

On board the troubled flight, passengers exchange worried looks.  The stewardesses have secured all the trolleys, crockery and the loose baggage and are now also strapped in in their chairs near the emergency exits. There was nothing to do but to wait.

…And pray, of course. And the passengers prayed to God, to Allah and various other preferred deities. Kuki Muggenay, the clerk to Sly Strydom, used to be an atheist (until Captain Mokoena’s announcement, that is). Her prayer is probably the most confused and anxious of them all.

In the cockpit, the brave captain discovered a few more red lights before most displays went blank suddenly. He now has no idea how much fuel he has left. By the time the tower tries to contact him, his radio is dead as well…

Captain Mokoena knows this is impossible. All modern aeroplanes have so many safety features, this can’t be happening. Safety is, after all, of paramount importance. There are backup systems for backup systems. Manual controls for when all else fails. There is no way an aircraft can die like this – on its own accord.

He’s right, of course. Only sabotage can cause this degree of mayhem, but then the perpetrator have to be an expert on this specific type of aircraft; say, for instance, one of the maintenance engineers at a major airport like Cape Town. Somebody with opportunity, motive and enough know-how to make fuses blow one after the other, maybe with several timing devices thrown in for good measure to short of the essential circuits.  Such a person would have had some serious reason for attempting to wreck an aeroplane and kill all the passengers on on board.

A few years ago, a plethora of organisations would have sprung to mind immediately. In the Old South Africa various individuals and organisations  tried their hands (with varying degrees of success) in bringing down planes, sinking ships and blowing up trains. Then politics got blamed for everything in a game nobody really understood and everybody suffered the consequences of.

But now, here, over the red sands of the Kalahari, Captain Mokoena has to manage the sabotage done by a man with a much more basic motivation. A man whose sense of reason got twisted around by a woman out for revenge, for instance. If such a man had reason to believe the woman in question would reward him with her ample and special favours – and even a rather obscene amount of money – well, he might just risk it all on one roll of the dice. An aeroplane going down on a domestic flight, due to various cleverly-disguised acts of sabotage would be headline news for a week. After that, an incompetent investigation would clear the pilot of all blame (or not) and newspapers will start writing about the president and the Guptas again.

One roll of the dice. That’s all the engineer needed.

Then he and Tremblebum will be off to Mauritius to mourn the untimely death of her husband after she inherited, the vast estate. Ironic, isn’t it, that a single signature on a piece of paper would have meant she only got a fraction of the cake? Now, if that document remains unsigned – and poor Kallie dies so tragically – it means she will get it all.

While they all scan the empty sky, Tremblebum Franz tries to force her face into a worried look. If Gertruida looked, she would have seen a face reminding her of Cruella de Vil.